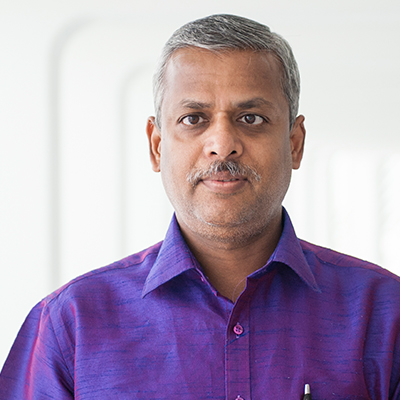 Dr. Sesha Srinivasan joined the Florida Poly faculty in 2014. Prior to that, he spent five years as a tenure-track assistant professor of physics at Tuskegee University. Srinivasan has more than a decade of research experience in the interdisciplinary areas of solid state and condensed matter physics, inorganic chemistry, chemical, and materials science engineering. His doctorate focused on the development of various rare-earth, transition metals and intermetallic alloys, composites, nanoparticles, and complex hydrides for reversible hydrogen storage applications. He and his post-doctoral advisor have collaborated extensively with scientists around the world for the hydrogen storage on lightweight complex hydrides, which was funded by the U.S. Department of Energy (DOE) and the World Energy Network (WE-NET), Japan.

His career has included two years at the University of Hawaii followed six years at the University of South Florida where he was a research scientist at the Clean Energy Research Center (CERC) under the leadership of professors Elias Stefanakos and Yogi Goswami. He has also served as an associate director of the Florida Energy Systems Consortium (FESC) where he coordinated a number of research projects on clean energy and environment, which were funded by a $9 million grant from the Florida Office of Energy.