Florida Poly has collaborated with the U.S. Navy to prepare students for access to the Navy’s prestigious Nuclear Propulsion Officer Candidate Program (NUPOC). It is the first pipeline program of its kind in the country.

This program is specifically designed to identify students who aspire to serve in U.S. Navy’s elite programs. Students develop the skills, training, and preparation to build a profile that will help make them competitive as they move through the program. The program provides a scholarship in the first and second year, and entrants are awarded compensation of $53,000 in each of their junior year and senior year, to help admitted students fund their studies at Florida Poly. NUPOC is one of the U.S. Navy’s most distinguished and challenging officer programs.

Benefits of the Program

The Florida Poly Nuclear Propulsion Pipeline Program is a highly selective program with a limited cohort of STEM students who enter Florida Poly as freshmen and begin preparing for U.S. Navy interviews from U.S. Navy officers, NUPOC officers, and University administrators. Beginning in their junior year, selected students are eligible for military healthcare and life insurance benefits, receive a military ID that allows access to low-cost shopping options on military bases and access to gymnasium facilities, and receive $53,000 in each of their junior and senior years, as well as a $15,000 signing bonus and a $2,000 bonus upon completing post-graduate nuclear propulsion training. Students in the program will develop strong bonds with friends and colleagues who can be counted on for life, with whom you will stand for and alongside as courageous and noble peers who share the highest values of integrity and honor for our country.

Florida Poly has designed and launched a dedicated pipeline program that prepares students toward eligibility for the U.S. Navy’s elite NUPOC programs in nuclear submarines, surface warfare, or naval reactor engineering – each of which requires talented STEM students in all majors offered at Florida Poly. The program is academically focused, given the requirements for leading nuclear propulsion operations within the U.S. Navy and beyond. Students maintain a full-time courseload throughout all four years of study as they complete their undergraduate degrees, and are not required to provide duty to the Navy during the week or on weekends during their years at Florida Poly. The generous financial support is meant to help students focus on their academic progress as there are several GPA requirements for higher levels of nuclear training roles.

Fall 2022 students who are selected to enter the Pipeline Program will receive $10,000 over the course of their freshman and sophomore years of study.

Completion of the Florida Poly Nuclear Propulsion Pipeline Program at the end of sophomore year maximizes a student’s preparation for the U.S. Navy’s NUPOC interview process and examinations, which provides a unique opportunity to get paid while completing a bachelor’s degree at Florida Poly and a challenging, prestigious, and exciting career to follow.

How the Program Works

Throughout their freshman and sophomore years, students in the Pipeline Program will be part of a coordinated campus community and participate regularly in activities with U.S. Navy and campus personnel. These activities and events – which include leadership seminars, mentoring, an expert speaker series, fitness programs, and field trips – are designed to maximize students’ exposure to key U.S. Navy mentors and provide unique opportunities to learn about and prepare for the NUPOC process and the Navy Nuclear Officer career field.

During their sophomore year, students in the program who have successfully completed the required Florida Poly coursework (Calculus 1 and Calculus-Based Physics 1) with a minimum GPA of 3.0 will be invited to begin the screening process for the U.S. Navy NUPOC Program.

Florida Poly and U.S. Navy officers will then collaboratively assist eligible students in the military screening and evaluation process for the Navy NUPOC Program, which currently requires medical screening, academic screening, a technical interview to evaluate the applicant’s knowledge of calculus and physics, a security clearance eligibility determination, and a personal interview with the director of naval reactors in Washington, D.C.

For Fall 2023, freshmen who enter the Florida Poly Nuclear Propulsion Pipeline Program will receive a $5,000 scholarship during their freshmen year and a $5,000 scholarship for their sophomore year to support their studies. These scholarships are limited and it is recommended for students to submit their application to the program by April 15th to receive scholarship consideration.

Students should have the potential to be leaders who are looking to harness their high level of skill in math and science to be applied in a meaningful way that will serve men and women with a deep commitment to advancing and protecting national interests, and/or gain skills that will catapult a career in a rapidly expanding global industry. To be considered, students must be nominated by a guidance counselor OR a high school calculus, physics, computer science, or engineering teacher. Typical GPAs average a 3.0, and average board scores are approximately an SAT of 1300 or an ACT of 28.

Applying to Florida Poly’s Nuclear Engineering Pipeline Program is one sure way to get the most out of your college experience while preparing you for expertise, prestige, and an adventurous career where you will make a significant impact. If you are an incoming freshmen or transfer, you can click the button below to apply. You must have an undergraduate admissions application in process or completed, and you will not receive a decision unless you are granted admission to the university.

Upon graduation, students who have successfully completed the NUPOC program begin the formal training process to become a U.S. Navy Officer in the Naval Nuclear Propulsion Program. The program leads to an appointment on active duty as an Ensign in U.S. Navy, serving aboard a nuclear-powered submarine or surface ship. Appointees will begin by completing the Officer Candidate School (OCS) for their specialized area.

Our Community and Leadership

Florida Poly is establishing a community forged by leaders currently serving in the U.S. Navy who are guiding and mentoring students as they work through their freshman and sophomore years in the Pipeline Program. 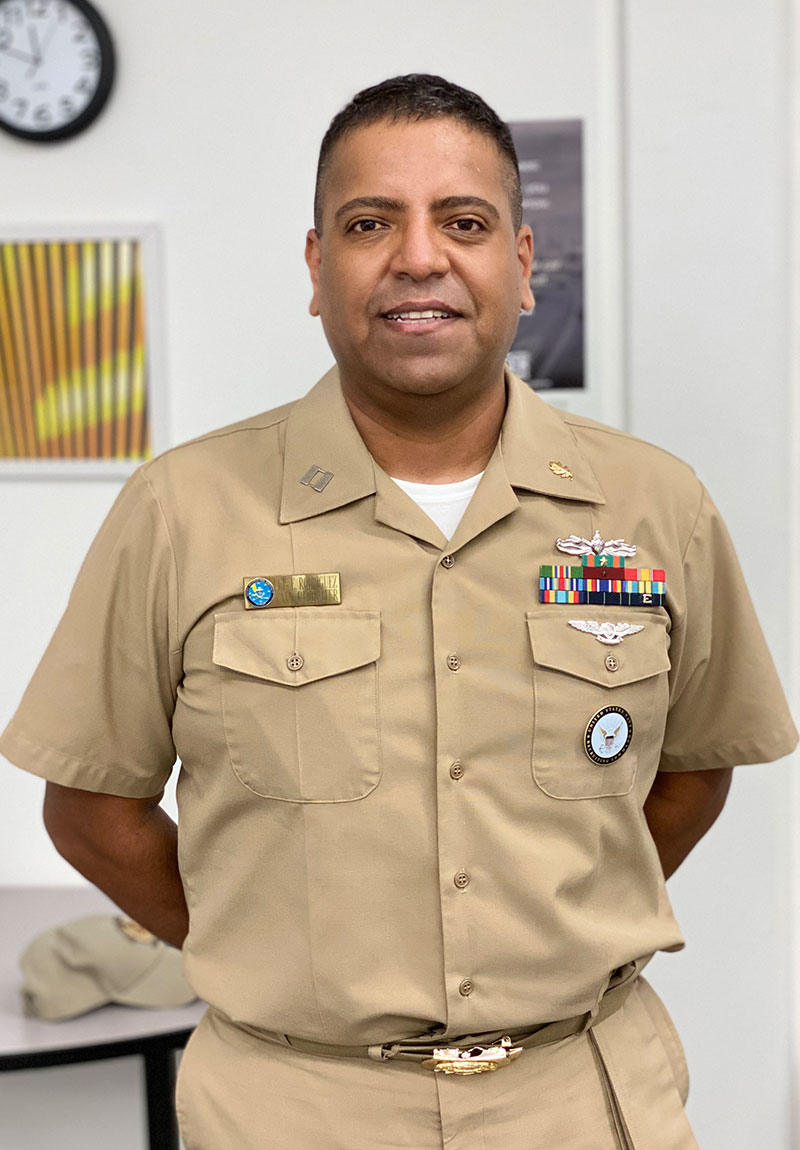 Lt. Luis E. Rodriguez was born and raised in Lima, Peru. He migrated to the U.S. as an adult and worked mostly for Citigroup in New York. He joined the U.S. Navy in 2003, starting in the Navy Reserves as UT3 (Seabee Battalion Bravo at Fort Schuyler, Bronx, New York). He converted to active duty as a disbursing clerk and later changed to the personnel specialist  rate. He worked five years aboard USS George Washington CVN-73, a nuclear-powered aircraft carrier. There, he was selected for a Collegiate Officer Program. At the end of his collegiate time, he left the enlisted ranks as an E7 and was commissioned as a medical service officer.

As an officer he did tours at Portsmouth (in finance), with the Marines at the 24th Marine Expeditionary Unit (as an operational planner), and with the Bureau of Medicine and Surgery BUMED HQ/DC (as a comptroller, managing the BUMED annual budget of more than $400 million). He is currently a general officer recruiter, NUPOC manager/coordinator, and division officer for the Gulf Coast South area of Florida.

LT Rodriguez holds six U.S. college degrees. Among them, a graduate degree in international security form Harvard University, a master’s degree in public health (administration/finance) from Old Dominion University and Eastern Virginia Medical School, a bachelor's degree in business from Excelsior College, and a bachelor's degree in history from Thomas Edison State University. Additionally, he has been a college instructor in calculus in Peru, and in the history of western civilization at Park University. 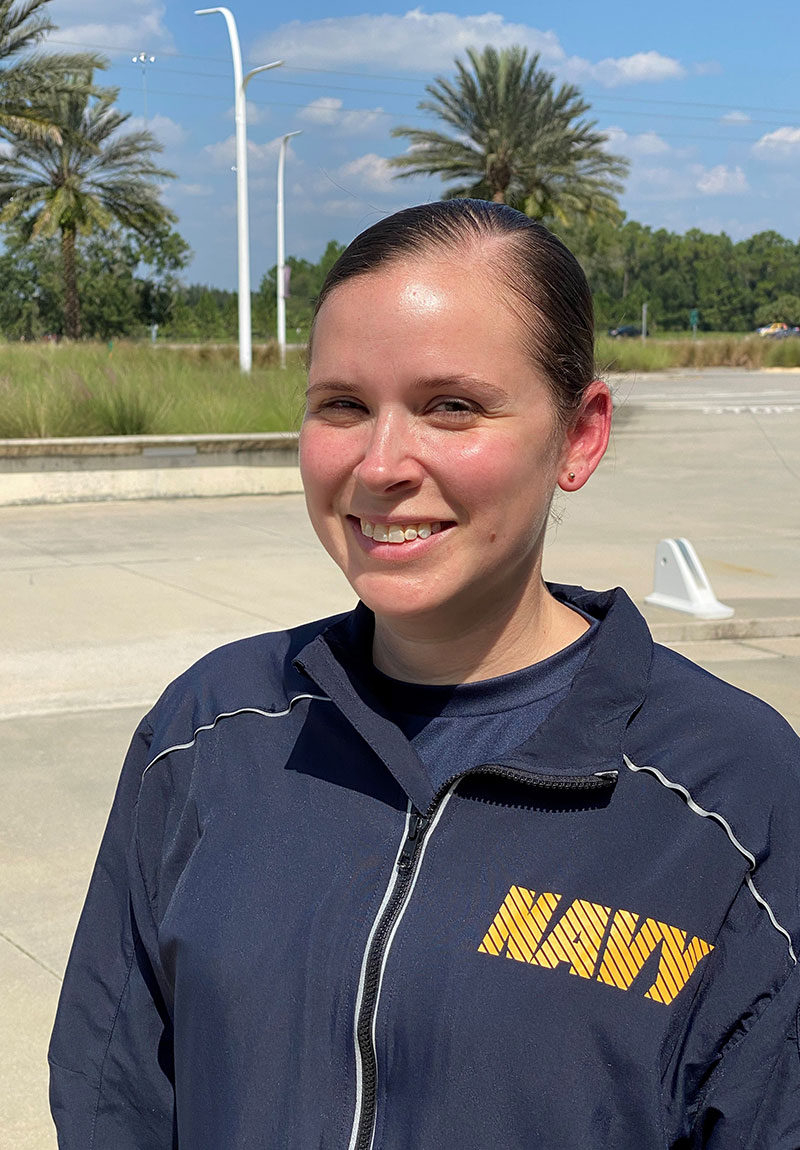 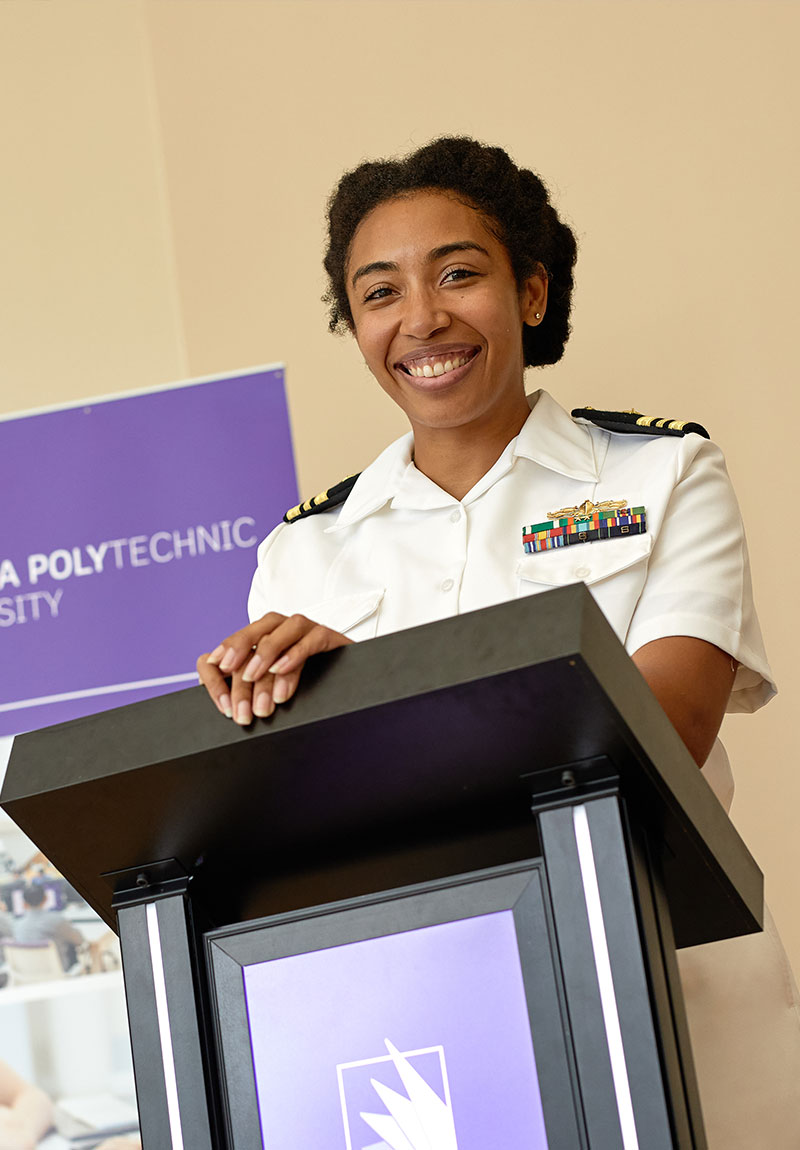 Lt. Cmdr. Erica Reid-Dixon has a bachelor of science degree in political science and comparative government from the United States Naval Academy, as well as a masters's degree in international relations and an executive masters of business administration degree. She most recently served as the second in command of Navy Operational Support Center (NOSC) Portland, directly supporting the NOSC commanding officer in order to provide strategic depth and deliver operational capabilities to the Navy and Marine Corps team and joint forces from peace to war. She has also served as a leadership instructor and lead planner for the Experiential Leadership Programs at the U.S. Naval Academy.